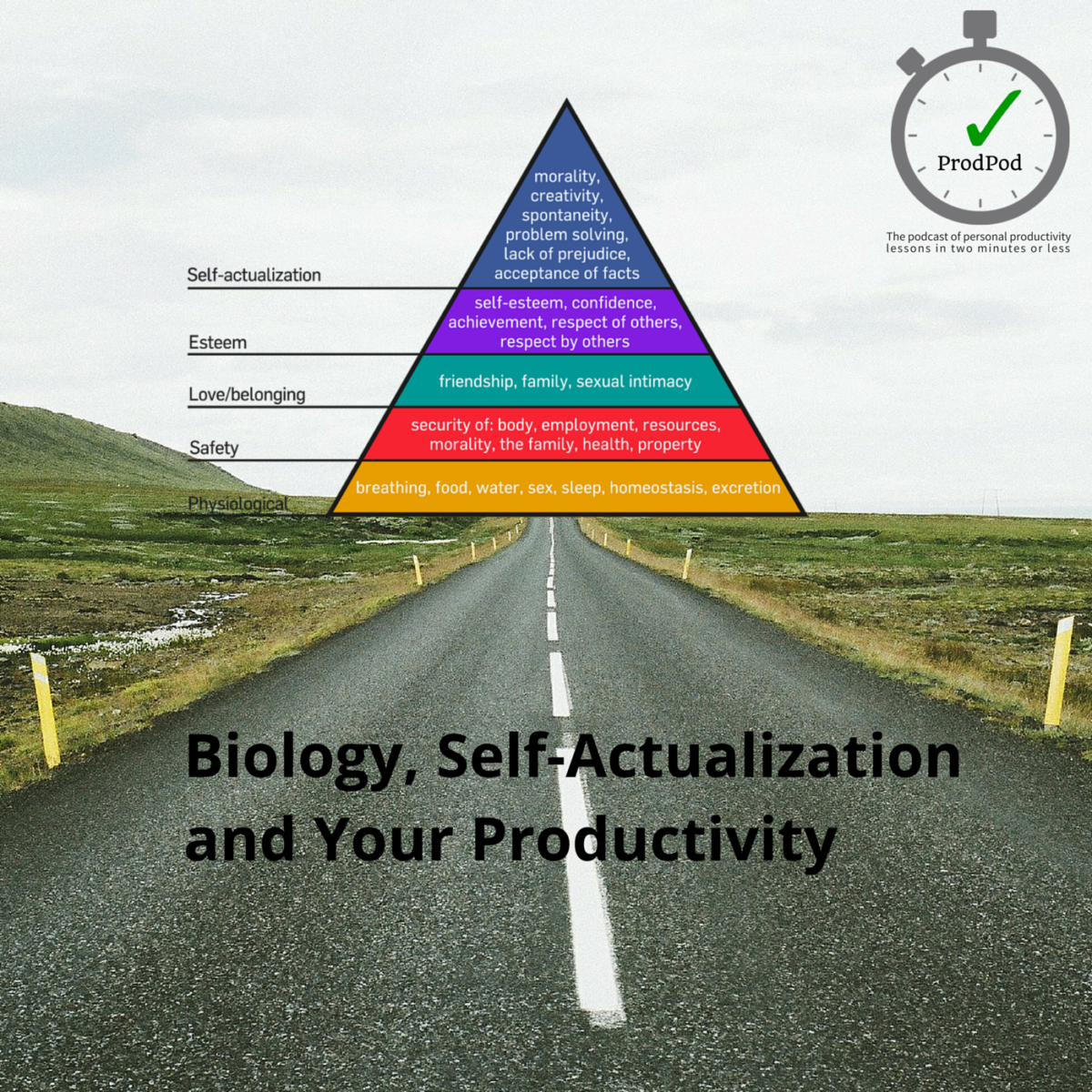 When the idea of self-actualization developed in the mid-20th century, far before the field of positive psychology was fostered by Dr. Martin Seligman, there was a desire to study and cure illness, mental and physical. Dr. Abraham Maslow tried something different; he studied the role model, the talented and the ingenious. By doing so, he hoped to unlock how we all could do more, better. He developed the hierarchy of needs (which most know by the pyramid with our biological needs at its base and self-actualization at its zenith), and expounded the theory of motivation starting in 1938 and in his 1954 publishing of Motivation and Personality. I’ve always found criticism of Maslow’s pyramid’s order as constructively lacking, but I thought it would be good in this post to discuss my thoughts on how you might look at the pyramid through a different lens for greater productivity.

Self-actualization is a heady topic. Becoming your greater or greatest self!? Where do you even begin? Maslow says start with nutrition, hydration, shelter, sex, sleep, breathing, and excretion.

Cognitive dissonance ensues. Society, and American culture specifically, drives us to take shortcuts. For example, we have products coming onto the market like Soylent that tries to hack our food consumption to our most basic and efficient nutritional needs. (And, don’t take this as me writing from some higher ground. As I write this, I have a browser tab open ready to add several weeks of Soylent to my shopping cart, so I’m just as culpable to this societal efficiency agenda!)

When I first learned and tried to invest in my own personal development, I saw each tier of the hierarchy of needs to be static and satisfied in order to reach the next. It took major life challenges to appear for me to realize that I could be knocked off and down a tier, and thinking of these as fixed accomplishments were counterproductive. The hierarchy of needs is fluid and it works on an overlapping paradigm like waves on the shores of your favorite beach. With each wave our needs wash over the other as high tides and low tides ebb and flow…hour by hour, day by day, week by week and until decade by decade. Compound benefits lead to surpluses and deficits depending upon how much we pay attention to our needs great and small. Don’t think of the hierarchy of needs as completing one level of game and then you move forward. That’s certainly how most interpret it on the macro level. In this game of life, you restart at each level of the pyramid at all and various times of your days, weeks, months and years.

The “hierarchy” part of the hierarchy of needs don’t matter as much is my point to critics. The fact that all the components are of equal importance in our life, I believe, was Maslow’s greatest gift to our collective understanding. I would still argue that your most basic needs that we together keep trying to suppress; things we may say constitute simple pleasures like mindfully eating your homemade food, clean water slowly drunk as it rehydrates us, and good nights’ rests and midday naps to rejuvenate the mind and heal the body.